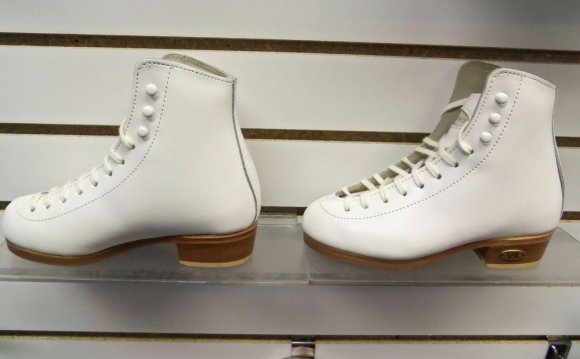 In diagrams of figures like the one above, some of the figures are shown with horizontal and vertical axes. That’s to indicate that the figure should have perfectly symmetrical and equally rounded circles of identical size, with the total length of the two circles equalling one-and-a-half times the skater’s height. But when you tested or competed in figures, you weren’t allowed to draw those axes, or even to mark the centre of the figure where the circles meet. You had to skate a perfectly symmetrical figure of a specified length, with circles of identical size and shape, and with turns or changes in the exact same place on each circle. And you had to do that without any marks to guide you, while travelling on a single foot and a single edge without making any scrapes or flats – and then you had to do that three times, in exactly the same way each time. It’s insanely difficult. And that is why I love figures, because doing them well is truly an art and a unique skill.

Figures used to be worth 60% of a skater’s overall mark in competitions. In 1968, the percentage of marks assigned to figures was reduced to 50%, and then figures gradually were given less and less weight until, in 1990, they were eliminated entirely from international skating competition. This happened for a couple of reasons, one of the big ones being television. Figure competitions don’t make for good TV, because you have to be able to see the actual figures up close to assess how good they are – although, having said that, I don’t think TV broadcasters really tried all that hard to find ways to accomplish this. TV viewers also were confused when they saw a skater perform a kick-ass freeskating program and then not win because he or she got lousy marks in a part of the competition they didn’t see. Doing figures took a lot of time at competitions, especially when each skater had to do several figures and a lot of skaters were competing. And training in figures was very time-consuming and expensive. Figures have to be done on clean ice to see the tracings, and you have to look at the figure while you’re doing it – not dodging other skaters – so figures sessions can’t be combined with any other kind of skating practice. A lot of skaters thought doing figures was boring, or hated getting up before the crack of dawn to go to early-morning figure sessions. And requiring figures in competitions was discouraging to skaters who were bad at figures but good at freeskating.

I started getting into figures as an adult skater. My coach taught me a couple of figures, and I was really intrigued by how challenging they were and how many different things you needed to do well to be good at them. At that time, figure tests were no longer required, but because I enjoyed doing figures, I took the preliminary figure test, which was the first test in the Canadian Figure Skating Association figure test system. And I failed – which was one of the most disheartening experiences of my entire skating career. I was in tears after that test, because I knew that I could do the figures, but it was so frustrating not to be able to do them correctly in front of a panel of judges standing very close to you and watching your every move. And then, just as I was almost ready to take the test again, figure tests were eliminated from the Canadian test system. I really regret that I never got to pass that test, but I did take and pass the Figure 1 test in the Ice Skating Institute (ISI) test system. And I competed in figures at the 1999 ISI World Recreational Team Championships, which was probably the most terrifying thing I have ever done in a competition. It was absolutely nerve-wracking to have to concentrate that hard and to not make stupid mistakes while being watched so closely.

So what do skaters get out of doing figures? Figures teach you clean edges, controlled turns, balance, and proper technique, all of which are so essential to everything else in skating. For example, every jump takes off from and lands on an edge. Figures help you learn what the edge feels like when it’s done correctly, and a clean edge gives you more momentum and power going into the jump, and better control when you land it. Figures teach you to concentrate, to be “in the moment”, and to be completely aware of where every part of your body is and how your body is moving. Doing figures is also very humbling because they’re so hard; you can’t fake your way through them with bad technique, so they really force you to develop your skills. And when a figure goes well, and you produce a beautiful symmetric clean tracing, the sense of accomplishment is incredible.