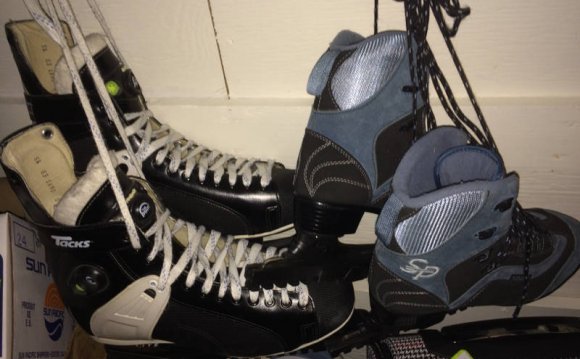 How to buy the right ice skates for kids – Ice skating is a fun activity that can be ruined by a pair of bad skates. There are some tips to follow that can help you pick out the best skates to make ice skating more enjoyable.

I consulted the staff at the ONYX Ice Arena and here are their suggestions for how to buy the right ice skates for kids.

Where to Buy Ice Skates
Buy ice skates from an experienced skate fitter. We recommend:

Fitting Ice Skates
It is important that ice skates fit properly. Wear thin socks or tights to your ice skate fitting appointment to get the most accurate fit. Skate sizes will generally run one size smaller than street shoe size.

When trying on ice skates, kick the heel back into the boot and lace up the ice skate. The foot should not slide around and there should be no big gaps anywhere in the boot. Remove the insole from the boot and place the heel at the back of the insole to check how much room is left at the toe.

Used skates may offer a bargain, but are not a good investment unless they fit well and are in good condition. When purchasing used skates, consider the following:

Ice Skate Sharpening
New skates must be sharpened before skating. They should also be sharpened about once every 7-10 hours of use. Reliable skate sharpeners in the area include:

Hockey Skates vs. Figure Skates
Many skaters begin lessons in figure skates because the flatter and longer blades make learning to skate easier. Often, skaters want to play hockey and are eager to switch into hockey skates. Skaters are generally ready for hockey skates when they start to gain speed and stability on the ice.

Tying Ice Skates
Even the most supportive skate will not help a skater unless tied properly. Follow these guidelines when tying skates:

Ice Skating Shoes For Girls | Item Which Useful For Snow ...