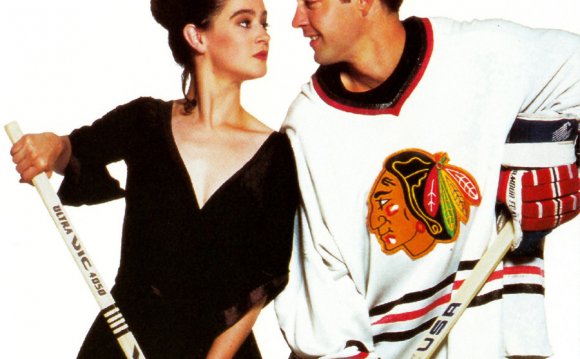 Figure skating carries the Winter Olympics. Sure, America has sent 216 athletes to Vancouver, and 201 of them neither figure skate nor ice dance. But each Olympic cycle, figure skating—especially women's figure skating—earns the highest ratings among U.S. viewers. During the 2006 games in Turin, Italy, 25.7 million Americans tuned in to watch the women's finals, while prime-time viewership was averaging closer to 20 million. Despite the sport's popularity, however, movies about figure skating are, quite simply, lousy. The skating is crummy, the writing is crummier, and the leads are without either personality or backbone.

Alas, figure-skating movies tend to take one or two of these elements and blow them wildly out of proportion. In Ice Princess, Ice Castles (both the version from the '70s and the remake released this month), and the Cutting Edge franchise—the main figure-skating titles—we're asked to root for boring, "naturally gifted" skaters who merrily leap over the years of training the sport requires to make it to the top—always, of course, to the disgust of the competition, which invariably consists of catty backstabbers hellbent on Olympic gold.

While few sports movies are entirely realistic—even those based on real events, like Miracle, are played up for dramatic effect—the idea that a hidden talent already most of the way through puberty could triple-axel her way onto the international scene is utterly absurd. And yet it happens again and again: In Disney's Ice Princess(2005), Casey, our hero, goes from skating on a pond for fun to the nationals in a matter of months. (In a conceit risible even by figure-skating-movie standards, her quick rise to prominence is explained by the fact that she's a science wiz: All she needs to take her to the top are some physics programs to help her analyze the jumps.) In Ice Castles (first released in 1978 and remade for this Olympic year), 16-year-old Lexie also goes from skating on a pond (she even taught herself a triple axel—a move performed in real life by just a handful of female figure skaters) to the nationals; all she needed was a new coach, a makeover, and some positive media attention. In The Cutting Edge (1992) a man goes from skating on a hockey team to the Olympics pairs competition in short order.

By contrast with our outsider hero, who manages to master the sport within a year of getting acquainted with the toe pick, the villain is always a figure-skating robot, someone with no life outside of the sport and no capacity to understand how someone could conceivably balance skating with dating or schoolwork. This, too, is a tired misconception about the sport. Most of the elite figure skaters today haven't entirely given up on being teenagers. Rachael Flatt, a 17-year-old competing in the Vancouver Games, seemingly never stops talking about her AP classes and says she hangs out with friends on weekends. Many leading teenage skaters from recent years are, by all accounts, strong students; 2002 gold medalist Sarah Hughes recently graduated from Yale, while her younger sister, also a former Olympian, is currently at Harvard.

These movies could be forgiven a certain lack of realism and tendency toward formula if it was in the service of good drama. But that's rarely been the case. In addition to being absurdly preternatural in their talents, the heroines of these movies are painfully unlikeable. For all that Ice Castles tries to convince its viewers that Lexie is winsome, she's actually quite dull—vacillating meekly between what her widowed father wants, what her hunky boyfriend wants, and what her coach wants. Figure skaters can absolutely be boring—the adjective is frequently lobbed at poor Flatt—but even the dull ones must have serious nerve to hurl themselves in the air, appear on international television wearing next to nothing, and withstand the harsh criticism of coaches, judges, and the public.

Review of the Remake of the Figure Skating Movie "Ice Castles"