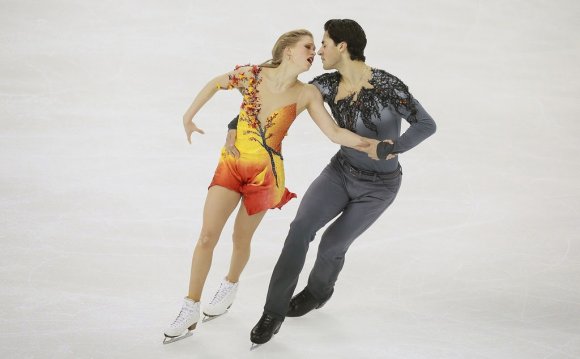 Ahead of the individual figure skating events kicking off Feb. 11, we took the opportunity to call out some of our favorite looks the top athletes sported in recent days in Russia. While NBC commentator and former champion Johnny Weir has attracted a lot of attention for his zany fashions, the majority of the sequins, rhinestones and feathers remain right where they've always been: On the ice.

Below are nine of our top Sochi looks from the team event and nine of our.. not-so-favorites.

Yulia Lipnitskaya of Russia not only impressed the world with her warp-speed, superhuman spins and consistent ability to land the sport's most difficult triple-triple combinations, but her "Schindler's List" free skate dress/coat was undeniably on point. Putin would approve. Lipnitskaya's teammates also brought top fashions. Russia's Elena Ilinykh and Nikita Katsalapov rocked this classic black-on-black look for their "Swan Lake" and looked sensational. We agree with our friends at HuffPost Canada, this was a winning look.

Fellow Russians Tatiana Volosozhar and Maxim Trankov also looked stunning in the pairs short program. This look for their dramatic, classical "Masquerade Waltz" program are an excellent example of pairs costumes not being too matchy-matchy but still coordinating - both with their music and each other - beautifully.

Gracie Gold of the United States was picturesque in her "Sleeping Beauty" free skate - and her dress coincidentally was a nearly perfect match for the arena's color scheme. Well done, Miss Gold!

Japan's Akiko Suzuki also brought her fashion "A" game with this beautifully sequined off-white dress during the ladies free skate.

Valentina Marchei of Italy brought a modern, somewhat goth look to her tango-inspired free skate and we loved it.

France's Mae Berenice Meite's short program dress was definitely not boring either. The vibrant pink was an excellent match for her sassy and sensual program to Prince's "Question of U."

Germany's Nelli Zhiganshina and Alexander Gazsi of Germany had the team event's biggest "WTF" moment with their Paris Hilton-meets-a-geek-themed short dance. The giant beige bow on her back end pushed this look way over the edge.

Russians Ekaterina Bobrova and Dmitri Soloviev - or, Bobrova to be specific - were blinding with their short dance costumes. Our eyes are still burning from Bobrova's dress, which was apparently Marilyn Monroe-inspired.

We were not fans of the free dance costumes worn by Canada's Tessa Virtue and Scott Moir. In addition to being sort of bizarre, they didn't seem to be a good match for their program's understated classical music and theme.

Japan's Tatsuki Machida's "Firebird" costume in the men's free skate matched his music and theme but maybe veered a bit too much into the extreme.

We're not in love with the colors of Ukraine's Julia Lavrentieva and Yuri Rudyk's costumes from the pairs short program.

China's Kexin Zhang would have had a nice look with her short program dress - if the too-deep sheer fabric covering her chest wasn't at such an awkward height.

We just can't get behind this look from Italy's Stefania Berton and Ondrej Hotarek for their short program. The duo looks like they're going to two different parties, despite her fringe matching his bright yellow pants.

Black lace over forest green with a big ole white design down the side of one pant leg meant a bit too much was going on with Italy's Paul Bonifacio Parkinson's short program costume.