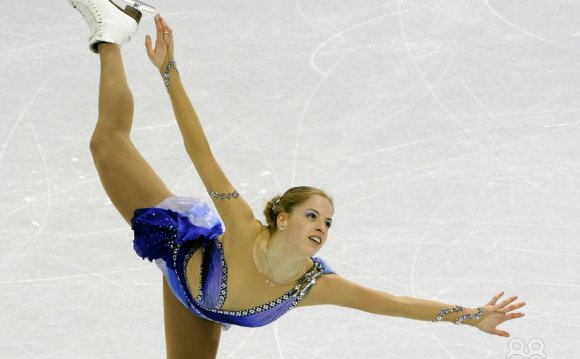 She skated almost flawlessly, earning the third best score of the night in the Winter Olympics women's figure skating short program. But the score really wasn't the most important thing to most people at Pacific Coliseum.

"I watched her as she was about to skate and it looked like she was struggling emotionally, " said Bill Thompson, chief executive officer of Skate Canada. "She just pulled herself together and put down a performance that I think - where she came in is irrelevant - was so magical and so heroic."

Rochette did not talk to the media after her skate, instead answering a few questions in private.

"I have no regrets, " she said, according to Michael Slipchuk, the high performance director for Team Canada and a former Olympian. "It was a nice warm welcome [from the crowd]. It was hard to handle, but I appreciate the support."

Asked how she is feeling emotionally, she said, "Words cannot describe."

On Tuesday night, the strain showed on Joannie Rochette's face as she came out on the ice. Her eyes showed the heavy weight of her heartache. But her performance - which earned her best short program score of the season - was nearly impeccable. As she began to skate, the crowd seemed to hold its collective breath as she went for her first elements, a triple Lutz followed by a double toe loop. She did not stumble.

And then the crowd was into it, at times clapping along with her music, and at times screaming when she nailed another jump.

At the end, Rochette's tears could not be held back and she bent over at the waist. She looked up at the crowd, clutching her chest with her right hand. Then she skated over to her coach, Manon Perron, and enveloped her with a weepy hug.

Thompson said Therese Rochette would have thought it was a "dream performance."

In January, Therese Rochette conducted an e-mail interview with The Christian Science Monitor. She told the magazine that her daughter was someone who often didn't need a lot of support but would call her when she needed a friendly voice.

"I always encouraged her to have confidence in herself, to believe in her dreams, to consider the progress that she has accomplished over many years. But in periods of great stress, I also have the necessary distance to remind her of a rule she knows well: above all, skate for herself, for her pleasure, " she wrote.

Slipchuk said Joannie Rochette was surrounded at the Games by a good support crew, including her father, Normand. Officials have been giving her distance, trying not to be intrusive, he said.

And the support from around the world has helped too, Thompson said. He said it was wonderful to see how many people have sent e-mails, cards and letters from all over the world.

The free program is Thursday night, so Joannie Rochette's journey is not complete.

"Let's be honest, she's on a very difficult emotional roller coaster. That's not going to end tonight. This was helpful, " Thompson said.

"If she skates this well again, she's done much more than anyone of us could have hoped for."

Part of complete coverage on

With the Winter Games set to close Sunday night, you can almost hear the Canadian officials saying, "We told you everything would work out."

Even before competition began, the Games faced criticism over weather and a fatal crash. The accidents, mistakes and embarrassments kept coming.

Tom de la Hunty took Dutch bobsledder Edwin van Calker to the track one last time Tuesday and asked his driver if he could do it.