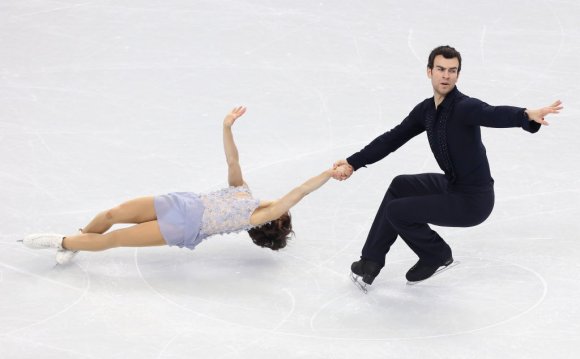 The first question I ask myself when the world championships come to a close is, “Did the results shake out as I expected?” The 2015 answer is – not exactly! This year’s event was full of fun surprises, incredible performances and of course a fair share of disappointments. But that is what keeps this sport exciting.

Some of my predictions were right on, but now I need to fill you in on some surprising results and the new faces that emerged in Shanghai.

Here are my personal highlights from worlds and my “silver linings” for those athletes who may be leaving Shanghai a bit disappointed.

Madison Chock and Evan Bates perform during the exhibition at the 2015 ISU World Figure Skating Championships at Shanghai Oriental Sports Center on March 28, 2015 in Shanghai.

This was the surprise event in China. In a discipline that is known for its predictability, it was anything but…

The French team was not expected to win with Canadians Kaitlyn Weaver & Andrew Poje coming into worlds without a loss this season and with the Americans Madison Chock & Evan Bates in the lead after the short dance. But all season there was that lingering feeling that this French team could do something big. In fourth place after the short dance, Gabriella and Guillaume delivered a magical free dance. They set themselves apart with a refreshing, light and airy performance that was perfectly mixed with power and spot-on technique.

Talk about meteoric rise — this team was 13th at worlds last season and this year skated away with the gold. That is the biggest standings jump in ice dance history, but well deserved with the performances they put out in Shanghai.

The Americans accomplished one goal in Shanghai – defeating the Canadians, but it turned out that even that wasn't enough to win the world title. Regardless, Madison and Evan had a fantastic outing and took home their first ever world medal.

Alexa Scimeca and Chris Knierim perform during the exhibition at the 2015 ISU World Figure Skating Championships at Shanghai Oriental Sports Center on March 28, 2015 in Shanghai.

Quad twists. Throw Quads. Side-by-side triple lutzes. The overwhelming theme here is that the technical bar is being raised.

This dynamic powerhouse of a team takes the ice with so much intensity and force it is impossible to pull your eyes away from them. They are known for their competitive gusto and they followed through with the goods… and with very technically difficult goods, I might add. Their technical prowess made the difference at worlds – an event where the home teams from China did not leave much room for error. It will be interesting to see if this Canadian team can cement themselves as the clear favorites over the next few years leading into the Olympic Winter Games in South Korea.

The national champs may have been hoping for a higher overall world standing, but they should be proud of their skates in in Shanghai. Alexa and Chris performed a quad twist with positive grades of execution and this will serve them well going forward. The deductions added up on the side-by-side jumps, however, so they should focus this off-season on improving their jump consistency. Big picture – Alexa and Chris end the season as the “team to beat” in the U.S. and that title is not an easy one to acquire. Hopefully next year will be a breakthrough season for them internationally, too.

One of my favorite free skates of the entire world championships came from this Spaniard. After the short program, I was one of many who thought he deserved to be ahead of his training mate, rival and reigning Olympic champion Yuzuru Hanyu of Japan. But hitting two of three quads in the free skate and a few mistakes by Yuzuru allowed for Javier to end up where he deserved to be – with the gold medal and the distinction of winning Spain’s first ever world title. (NBA star Pau Gasol even tweeted his congratulations to his countryman!) Not only did he win a historic gold, but Javier also proved that Yuzuru is not invincible. The fact that these two have the same coach, train side by side and maintain a healthy friends-but-rivals relationship is truly sportsmanship at its best and a formula you do not come across every day.

Jason showed us once again that his no-quad strategy combined with consistency can yield fantastic results. In an event where the top three men attempted a quad in the short and two (or three) in the free skate – the fact that Jason finished just behind in fourth is a testament to the quality of what he did put out there. That being said – can you imagine what he is capable of when he adds that element into the mix next year? He is a complete skater who is about to emerge as a podium favorite very soon. I cannot wait to see this unfold.

I saw this one coming all season. Liza has dominated everything and everyone, competing an unprecedented 13 times this year. While that could have worked against her come worlds – tired legs, overcooked performances – it did just the opposite and gave her more and more confidence. Liza was the only lady to throw a triple axel and — on top of that — she attempted it for the first time in major international competition when the stakes were the highest, in the risky short program where mistakes are very costly. It was a goose bumps moment for me. By landing it in the short, she gave herself a comfortable cushion going into the free skate where she got the job done by staying on her feet. Liza capped off her season with yet another gold, but I bet this one is the sweetest.