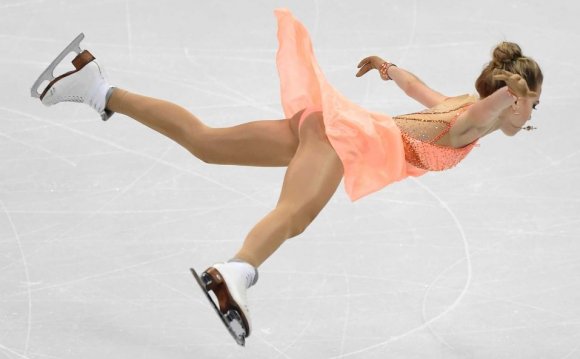 BRATISLAVA, Slovakia - Evgenia Medvedeva won gold in her debut at the European figure skating championships Friday, leading a Russian sweep of the podium in the women's competition.

Leading after the short program, the 16-year-old performed an almost perfect free skate, with a fall on a double axel being the only notable flaw.

Medvedeva earned a total of 215.45 while Radionova, who also took silver at last year's championships in Stockholm, got 209.99.

Radionova skated with a technical precision to the music from "Titanic" but landed a triple lutz with uncertainty.

Anna Pogorilaya was third, as she was last year, after she fell twice with a 187.05, more than 10 points ahead of Angelina Kuchvalska of Latvia in fourth.

Skating to the song "Nagada Sang Dhol, " from a Bollywood film, the Russians earned 79.77 points. They have a lead of more than four points over German pair Aliona Savchenko and Bruno Massot, who scored 75.54 points.

Massot is a new partner for Savchenko, a five-time world champion.

Evgenia Tarasova and Vladimir Morozov, another Russian pair, were third with 70.17 points.

Defending champions Yuko Kavaguti and Alexander Smirnov of Russia were forced to withdraw because of Kavaguti's injury.