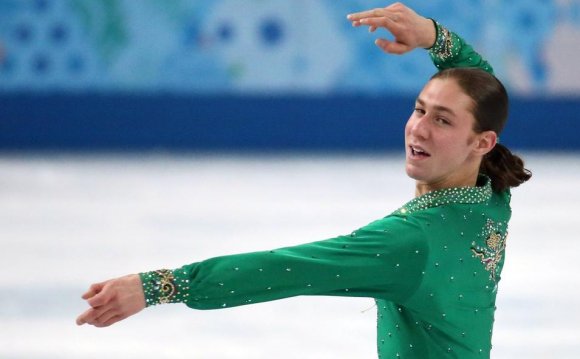 Jason Brown competes in the men's free skate at the ISU World Team Trophy at Yoyogi National Gymnasium on April 17, 2015 in Tokyo.

Brown had been dealing with a sore back for most of the season, competing in pain as his condition gradually worsened. A week before he left for Japan to compete at NHK Trophy was when it finally became unmanageable.

“It was something that I can’t attribute to a particular jump, spin or element, ” Brown said. “It’s not something that’s acute. We’ve been monitoring it over time and it got to that point where it flared up and I couldn’t manage it anymore.”

After making the decision to withdraw from the NHK Trophy, Brown took two weeks off the ice to rest and allow his back to “calm down.” As he began feeling healthier, he returned to regular training sessions with the goal of managing the condition through national championships, which take place Jan. 17-24 in St. Paul, Minnesota. But his return proved to be too soon as it quickly became too painful to handle.

Brown is currently in physical therapy and, though his doctors are confident he will return to full health with proper recovery time, he is hesitant to put a timetable on what exactly that recovery time will be.

“After I experienced what I went through in Japan and then trying to get ready for U.S. championships, I think that could attribute to why it flared up again, ” said Brown, a 2014 Olympic bronze medalist in the team event. “So we’re really just trying to take it step by step and making sure that I get that official approval by doctors that, OK, now I’m ready. Now you’re at 100 percent, now we’re going to give you the green light.”

“Right now my main focus is getting healthy so I can be back on the ice, ” Brown said. “As soon as I’m at that 100-percent mark and doctors tell me I can go ahead and get on the ice, I will. And we’ll see what happens from there."