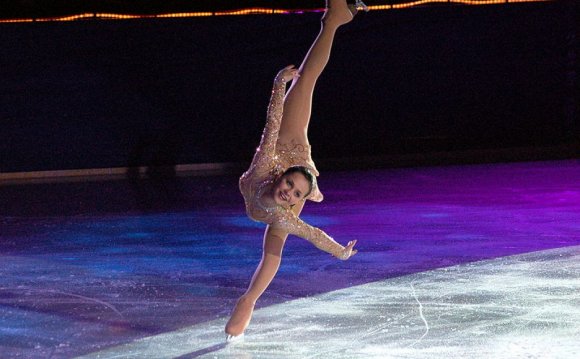 Figure skating is the most mysterious of winter Olympic sports: It's got all the athleticism of the rest of the games, plus precarious physics and designer dresses. With the Sochi Ladies Free Skate drawing closer, the Cut spoke to a handful of the people who know the sport best but whom you won't be seeing on TV — the former competitors, the coaches, the parents, and the current 12-year-old national champion. What's it like inside the world of figure skating? Read on.

“I’ve been offered a free ride by girls.”
Chad Brennan, national competitor, pairs
I started pairs skating when I was 10. I was kind of forced into it by my mom, who told this girl I would skate with her. At the time, I didn’t want to do it because I didn’t want to touch her armpits.

Skating pairs is like a marriage — but like a marriage without any of the dating and engagement process. You pretty much make the commitment right away and then it’s full-force ahead. Boys are so much in demand in skating that a girl who wants to skate pairs will do everything she can to get a partner — which means fronting the cost of everything. I’ve been offered a free ride by girls. They offered to pay for my skating and equipment if I moved to live and skate with her, but I was never okay with that. People I’ve known who have done that end up feeling like they were owned by their partners, because their partner was footing the bill for everything. I just feel like it should be an equal 50-50 relationship.

“It’s a cult.”
Regional competitor, ladies
Skating was probably the No. 1 thing in my life until about eighth grade, when I quit. I was skating every day, and toward the end I was doing before school and after school. I got to the point where it was like, Either you have to do this fully or you’re never going to be that great at it. I wanted to play team sports, and I wanted to have a social life — and skating takes up so much time. It was less about wanting to quit skating and more about wanting to do other things.

I think you don’t really understand the culture if you’re not involved with it. The training is more intense than anything I’ve ever done — and I played a varsity sport in college. It’s a cult. Once you’re in, you’re completely and utterly enveloped in it. I don’t know how to explain it. I think you just live and breathe it, which is an unnatural thing.

“My parents wanted me to join Disney on Ice instead of college.”
Regional competitor, ladies
When I was graduating from high school, I could have gone to Disney on Ice, but I was like, "I’m going to college." My parents were like, “What did we get out of the investment?” And I was like, “What do you mean, ‘the investment?’" To me, it was just a sport that I did, but for my parents, it was so intense — so much time and so much money. It becomes a family thing. I was talking to another mom, and she was saying that she pays more than $60, 000 a year for her daughter’s skating. That’s more than I pay to go to NYU.

“I was bullied quite a bit.”
Matej Silecky, sectionals competitor, mens
In elementary school, I wasn’t teased so much. My friends thought it was cool that I figure skated. In middle school, for sure, I was bullied quite a bit. I was called a lot of different things, from the fact that my name rhymes with “gay." There were a lot of explicit words used along with that. Everyone was hating on me — they thought I was this gay figure skater who wore a tutu on the ice. It was really upsetting to hear, because it was something that I really loved to do.

I wasn’t part of the public-school system from the sixth grade on — a distance-education program allowed me the flexibility to have more time to train. I wouldn’t say it was a sacrifice, because it opened up a lot of opportunities.

“My whole life is dedicated to her skating.”
Yalin Murdorch, mother of a 12-year-old regional competitor
As soon as I found out that I was pregnant with a girl, I bought her the tiniest pair of Riedell skates. I was coaching, so I would sit her down on the corner of the ice with a helmet and some markers, and if she needed me, she had a little walker. That’s how she started skating, around 1 or 2. She’s 12 now. My big concern is that I’m constantly trying to keep her in the right spot — get her to the right coaches, with the right people, make sure she has enough hours on the ice. I try to get her on the ice for 20 hours a week, but sometimes it ends up being more like 18. I have to drive her an hour so she can have two hours of ice time. We’re probably each other’s best friends because we spend so much time together. We’re gone all the time — I’d say that my whole life is dedicated to her skating. I’m completely at her beck and call.

“I threw up every time before I competed — except at the Olympics.”
Sheryl Franks, 1980 Olympic competitor, pairs
I used to throw up every time before I competed. If I didn’t throw up, I knew it wasn’t going to be a good performance. Every time, just before I got on the ice to compete, my coach would be holding my hair. The only time I didn’t throw up was at the Olympics. The pressure is incredible. It’s like nothing you’ve ever experienced. It’s all the years and years, and then you have five minutes to go out there and do your stuff. There’s no retake.

“It sucks you in.”
Regional competitor, ladies
It’s almost like pageant moms or dance moms. So many of the parents put every last penny into the sequins on the dress and the coaches and the competitions. I think many of them did believe that their daughter was going to make it to the Olympics and be the next Michelle Kwan, when in reality they were very, very far away from it. I was never going to make it to the Olympics, but my goal certainly would have been to make it to nationals — although I was probably far away from that as well. You get very involved in the world and sucked into it. You can’t have many other passions, because it’s all or nothing. Even if you’re not going to make it to that level, there are so many people training as if they would. I might have been one of those.