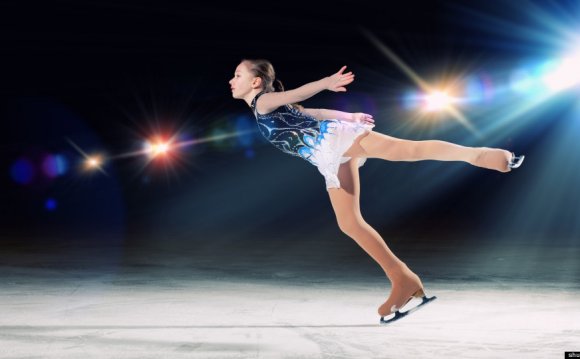 How do they do it?
CREDIT: David Davies/PA Archive.

Figure skating is always the highlight of the Winter Olympics. With the introduction of a team competition this year, there are five figure skating events. And we’ve already seen much drama with records broken and the retirement of veteran showman Evgeni Plushenko. He pulled out after badly landing a triple Axel – one of the sport’s signature jumps.

Spectators often take the grace and beauty of figure skating for granted. But many don’t realise the speed, power and strength needed to complete the jumps and spins. Gliding across the ice and then springing into the air to rotate three or four times before landing lightly on a single tiny blade and gliding off again is an exact science. There are many types of jumps and each jump may be done in combination with another, but two fan favourites are the Axel and Lutz.

This is my favourite jump. The Axel is the only jump where the skater faces forward as they take off the ice. They start by gliding backward, but then step forward and jump into the air, driving forward and upward with their arms and leg. It is a powerful jump where athletes gain great heights.

Because they are facing forward at take-off, the skaters have an extra half revolution to do before they land (all figure skating jumps land backward). So a triple Axel is really three and a half revolutions in the air. To turn so many times it is critical that skaters pull their arms and legs into a tight pencil like position. Crossing their ankles, pressing their legs tightly together and holding their elbows and hands tight against their chest, this minimises the resistance they create with the air.

The tighter a skater is, the faster they can rotate. If an arm or foot is sticking out, the mass of the arm or foot is too far from their axis of rotation and slows down the spin. Easy in principle, in reality they have to fight to keep their arms and legs in tight. Skaters must use their muscles to create centripetal force, which pulls objects towards the axis of rotation, keeping them on a circular path. If they relax, their arms and feet will want to keep moving straight and will get flung outward.

David Jenkins does a triple Axel for the cameras in 1957.

You will see triple and quadruple Lutzes. A feature of the Lutz that makes it challenging from a scientific standpoint is the entry. Skaters must do a long backward glide on the outside edge of one foot as they approach the jump, causing them to arc clockwise if they are on their left foot and anticlockwise if they are on their right. Then, they reach back with the other foot, tap the toe-pick into the ice and vault off it, turning in the opposite direction to the arc in the air.

This initial “counter rotation” helps skaters gain angular momentum for the jump. This is the rotational momentum of the skater about their axis of rotation – the imaginary line that runs up and down the centre of the body, which skaters spin around while in the air. Skaters get angular momentum from a twisting push off the ice as they rotate their body and arms when they jump.

In a Lutz, the counter rotation can increase the range of motion the skater turns through helping create more angular momentum for the jump. While this sounds advantageous, there is the added difficulty of staying on the outside edge as they start the counterclockwise rotation. A common problem is a “flutz”. If the skater falls or rolls onto the inside edge, it is not a true Lutz and points will be deducted.

As you watch the games, listen to the announcers and see if you can identify the Axel and Lutz. Look for the arm and leg drive in forward take-off Axel that helps create power and jump height. Look for the long backward glide of the Lutz and the skater using the arms and rotation of the body to create angular momentum and rotation speed while staying on the outside edge leaning away from the rotation of the jump.