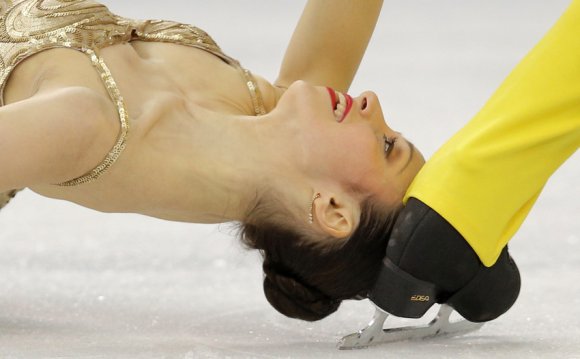 It’s not like figure skating costumes have ever been a bastion of taste or restraint, but some of these outfits are so freaking weird I wonder how anyone ever thought they were appropriate to wear at the biggest athletic event in the world. 2006 and 2010 were particularly heinous years, which is strange because I assumed the 80s would yield the most offensive outfits. Honestly, I don’t know whether to hope the figure skating fashion gets a little bit better at the Sochi Olympics this year or pray that it remains WTF-worthy. Either way, it’s going to be fun to watch.

Katarina Witt at the 1988 Olympics

Katarina's costume for her short program at the 1988 games was so skimpy that it inspired the "Katarina rule, " dictating that costumes have to cover the entire hip and buttock. I'm not scandalized by seeing all that skin, but by the tacky showgirl-esque quality. Photo: by Bob Thomas/Getty Images

Oksana Baiul at the 1994 Olympics

Oksana Baiul may have won gold in this skating dress, but that doesn't mean it doesn't look like what a super femme flamingo would wear on a once-in-a-lifetime trip to Vegas. Photo: Bob Thomas/Getty Images)

Viktor Petrenko at the 1994 Olympics

Ok, this costume is technically from an exhibition, not an Olympic competition. But oh god. Oh god, the sequins. Photo: Pascal Rondeau/ALLSPORT

Jenni Meno and Todd Sand at the 1994 Olympics

These are just straight up ugly, y'all. Photo: Bob Thomas/Getty Images

Marina Aganina and Artem Knyazev at the 2006 Olympics

My eyes. MY EYES! Photo: TIMOTHY A. CLARY/AFP/Getty Images

Carolina Kostner at the 2006 Olympics

Even though it was designed by Roberto Cavalli and is supposed to be stars and/or snowflakes, it looks like spiders. Spiders crawling alllllll over her while she skates. Photo: Bob Thomas/Getty Images

Elena Grushina and Ruslan Goncharov at the 2006 Olympics

These Ukrainian ice dancers won the bronze medal. Must have been the tassels that put 'em over th edge. Photo: Adam Berry/Bloomberg via Getty Images

Irina Slutskaya at the 2006 Olympics

This looks like the 4th of July for gymnasts. Photo: Corey Sipkin/NY Daily News Archive via Getty Images

Daisuke Takahashi at the 2010 Olympics

Japan's Daisuke Takahashi won the bronze medal in this outfit that reminds me of the composer Beethoven on acid. Photo: YURI KADOBNOV/AFP/Getty Images

Nathalie Pechalat and Fabian Bourzat at the 2010 Olympics

These French ice dancers went with an Old West theme and it looks both crappy and corny. Photo: YURI KADOBNOV/AFP/Getty Images