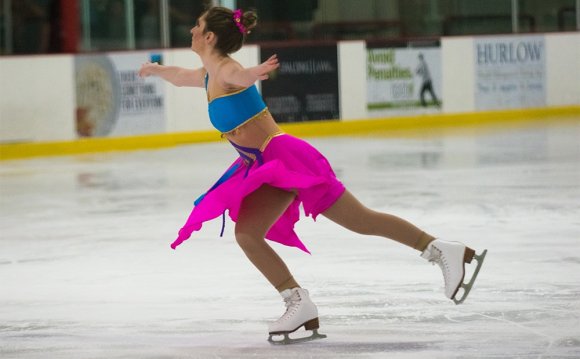 There's not much debate over the fact that the music choices in Olympic figure skating are bland and repetitive; there's only slightly more debate over the quality of the accompanying costumes. So we decided to offer up better solutions and are asking you, humble readers, to determine whose is best.

The rules: We each picked a musical number and a hopefully thematic costume for our imaginary routines. None of us knows how to skate, except probably the Canadian staffer, so just ignore that part of it. Just close your eyes, listen to the music, visualize us (or anyone, really) skating along doing all the skating tricks and such in the costumes we describe. Then, choose who you liked best.

My short program: "The Devil Went Down to Georgia"
Costume: Sexy Cowboy

Sexy cowboy from the Village. (AP)

My short program would be tailored to the kind of skater my ideal self would be: I'd be a jumper, a bit immature, possibly 17, and need to really cash in on the excitement to make up for my artistry. The song has such a strong opening with all those fiddles that it would set up perfectly for my quad toe-triple toe. And it revs up just in time for a triple axel. Think of Jason Brown's "Riverdance" and multiply its excitement by four and you kinda get what I'm aiming for.

Going into my first Olympics as an "exciting skater, " I would need to keep up my excitement factor. Nina Simone's swirling piano riffs, piping flutes, and relentless rhythm in these two songs would make it hard for anyone to forget me ... until the next quadrennial when I mature and unveil a more deeply-emotional performance.

Costume: I will perform to a Spice Girls medley, and I get to be Baby Spice, because this is my performance. I'm thinking a good costume would be a glitter skating dress and the electric blue gloves Baby wears in the "Say You'll Be There" video. Do they make platform ice skates?

The medley should start out with "Stop, " and then transition into "2 Become 1" for a brief emotional moment. The big finale will obviously be to "Wannabe." It would be nice if the Olympic committee allowed four of my friends to join me at the end (but they will have to fight over who has to be Sporty). Also would be cool to get some UFOs in there.

I would skate to "Mars" by Gustav Holst, because

Costume: The obvious choice would be deep red costumes inspired by Flash Gordon and Labyrinth. Basically this.

My first exposure to figure skating, or ice dance, was not from an Olympics broadcast, probably, despite growing up in Canada during the early 90s, when Kurt Browning and Elvis Stojko were kings. My introduction most likely came when I saw D2: The Mighty Ducks for the first time. Kenny Wu, a new player on the ducks, is a former Olympic figure skater who has troubles adjusting to his new game. Misunderstood, but not unwelcome, Wu learns how to apply his old skills to hockey, and scores a crucial goal against Iceland, the movie's big bad rival team. Because of his diminutive stature, Wu is a natural underdog, but he earns the respect of his teammates and opponents.

Costume: The struggle between two identities — shedding one skin for another — is prefect for an ice dance routine, but perhaps a reversal is in order. Starting out in full hockey gear, I'd dazzle judges as I stripped away piece after piece, bulky shoulder pad after bulky shoulder pad, until there's nothing left but a traditional ice dance outfit, but in hockey skates, of course. The music would Tag Team's "Whoomp! There It Is!" which was used in the movie, but remixed so it's much slower and fitting of an emotional ice dance routine, perhaps by Canadian producer Ryan Hemsworth. Wu! Wu! Wu! Kenny Wu!

Short program: I would have to go with the instrumental version of Singing in the Rain's "You Were Meant for Me, " because its festive and playful and Singing in the Rain is great. Also it would mean that I could wear something flapper-y. Presumably, I'd be talented and capable to keep up with the changes in the music and build a complex but elegant routine.

Long program: "Rhapsody in Blue" because I like it and it's got lots of dramatic crescendos.

Short program: This is a difficult decision, because I want to be a cold, elegant, weird Soviet-esque champion like Evgeni Plushenko, but I also like music. Since the short program is supposed to be faster and peppier, we'd would show off our dance skills to this remix of Rhye's "The Fall." (I'd do pairs because it's the most exciting, with the most upside-down flipping-type moves.)

Costume: "Sexy beach person." Long sleeves. No crystals, no flesh mesh. Not black or white, because it doesn't look as good on TV. Deep blue, I guess.

Obviously, since I'm a nerd, I'm going to choose musical theater numbers for my skating programs.

Long program: The overture from
Costume: I'd wear a variation on a cute sailor costume.

Joe: A Tribute to the Olympics

"Slow me down" - Figure Skating Interpretive