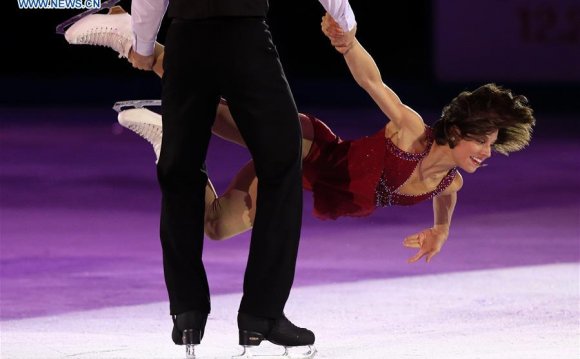 Madison Chock and Evan Bates pose for the media during the ice-dance medals ceremony of the ISU Grand Prix of Figure Skating Final at Barcelona International Convention Centre on Dec. 13, 2014 in Barcelona, Spain.

Ashley Wagner poses for the media at the ladies medal ceremony of the ISU Grand Prix of Figure Skating Final at Barcelina International Convention Center on Dec. 13, 2014 in Barcelona, Spain.

Proving age is just a number, 23-year-old Ashley Wagner took bronze in the ladies competition with a score of 189.50, skating against a field of teenagers. Russians Elizaveta Tuktamysheva (age 17) and Elena Radionova (age 15) earned gold and silver.

Wagner is well aware of what it takes to succeed on this stage. Barcelona marked her fourth Grand Prix Final appearance. The only U.S. woman with more is nine-time U.S. champion Michelle Kwan, who made the final five times. Wagner already owns silver and bronze medals from her past two finals.

“I’ve been here, ” Wagner said on competing at her fourth Grand Prix Final. “I have a lot more experience in some of these other girls. But quite honestly, it doesn’t get easier the more times you compete at a competition. It’s still stressful and up against a really strong field. I’ve been focusing on getting my technical elements stronger and working on the performance side of my skating.”

Her free skate in Barcelona was the first time she performed a triple loop-half loop-triple Salchow in competition.

Wagner was pleased with her result, after improving from sixth (of six skaters) in the short program to third in the free skate. Her next goal is to continue working on become a more consistent skater, which she hopes will lead to her third national title at the U.S. Figure Skating Championships in Greensboro, North Carolina, Jan. 17-25, and potentially a medal at the World Figure Skating Championships in Shanghai, March 23-29.

“It’s amazing, ” said two-time Olympian Bates. “I think a year ago if you told us we’d be second at the Grand Prix Final, we would definitely both be ecstatic about that. We put in a lot of work this summer so it’s nice to have it pay off.”

The duo was second to Canadians Kaitlyn Weaver and Andrew Poje, who scored 181.14 to the Americans’ 167.09. Gabriella Papadakis and Guillaume Cizeron of France earned bronze, while the brother-sister team of Maia Shibutani and Alex Shibutani finished fourth. The Shibutanis sat in third after the short dance, but finished sixth in the free dance.

While U.S. ice dance lost Meryl Davis and Charlie White this year, who decided not to compete this season after winning gold at the Sochi 2014 Olympic Winter Games, Chock and Bates and the Shibutanis quickly stepped up to reinforce the depth of Team USA. The Shib Sibs returned to the Grand Prix Final for the first time since 2011, while Chock and Bates earned their first gold medal on the grand prix circuit.

The teams will next compete at the U.S. championships in Greensboro, where a new national champion will be crowned for the first time in seven years. The Shibutanis have two silvers and two bronzes at nationals, while Chock and Bates are the two-time reigning silver medalists.