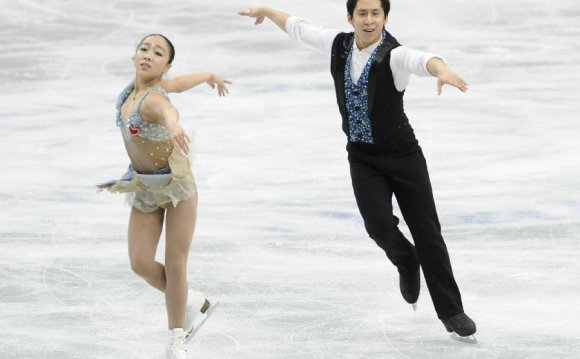 A happy Jeremy Abbott after his free skate at the 2014 World Championships in Saitama, Japan. (Yuna Shino / Reuters)

Jeremy Abbott did not win a medal, but Abbott's performance at his final figure skating competition still will count as something of a triumph.

By finishing fourth in the free skate and fifth overall Friday at the World Figure Skating Championships in Saitama, Japan, Abbott played the key role in helping the U.S. regain the third men’s entry at worlds they have not had since 2011.

The finishes of four-time U.S. champion Abbott and 2013 U.S. champion Max Aaron needed an aggregate of 13 or less to get the third spot.

With Aaron having done a desultory free skate that would leave him eighth overall, Abbott needed to move up significantly from his eighth in the short program.

Opening with a successful quadruple jump, he did just that – and wished it could have been more.

“I know that I could have been much higher than that, ” he said. “That was a little disappointing because I wanted to make a big move with that program.”

The fifth matched Abbott’s best finish at a global championship, from the 2010 worlds. He has said this season will be his last as a competitive skater.

As was the case in 2010, when he had finished ninth at the Olympics, the 28-year-old Abbott benefitted from the absence at worlds of four men who had finished ahead of him at the 2014 Winter Games, where he was 12th.

“I’m really happy with how I skated, ” he said.

Despite a personal best total score, Abbott wound up 29 points behind bronze medalist Javier Fernandez of Spain and 36 back of winner Yuzuru Hanyu of Japan. He beat teammate Tatsuki Machida by just one-third of a point for the gold.

Hanyu, 19, became the second Japanese man to win the world title, after Daisuke Takahashi in 2010. He and Machida, 24, became the first Japanese men to finish 1-2 at worlds.

Hanyu was just the second new men’s Olympic champion to compete at the post-Winter Games worlds since 1994 and the first since 2002, when Russia’s Alexei Yagudin also added the world title to his Olympic title.

For Aaron, 22, a solid seventh in his worlds debut against a deeper field last year, this has been a difficult season.

U.S. Figure Skating’s odd decision in January to pick him for this worlds over Jason Brown, the top U.S. man in the Olympics (9th) and runner-up at nationals, nearly blew up in the federation’s face. Aaron got ninth in the short program and negative grades of execution on six of his eight jumping passes in the free skate.

``I’m frustrated, ” Aaron said. “I trained hard for this but obviously it didn’t go the way I trained it. It’s reality.