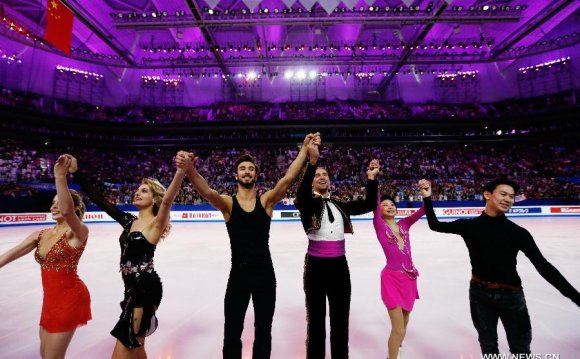 COLORADO SPRINGS, Colo. - American teen Nathan Chen will miss the world championships after injuring his hip in an exhibition hours after winning the bronze medal at nationals.

Chen underwent left hip surgery Wednesday. He is expected to return to the ice with restrictions in eight to 10 weeks and make a full recovery, U.S. Figure Skating announced Thursday, but the injury will keep him out of both the junior and senior world championships.

The 16-year-old Chen had a pair of stunning performances at the U.S. Championships, landing two quadruple jumps in his short program Friday and four in his free skate Sunday - becoming the first American man to accomplish each feat.

On Sunday night, he took part in the "Skating Spectacular" that follows major competitions and was hurt on a jump attempt. Chen has struggled with injuries in recent years as he's gone through growth spurts. U.S. Figure Skating had said Sunday that he aggravated an old injury.

Chen suffered an avulsion injury - when a piece of bone tears away from the main part of the bone. Adolescent athletes are at higher risk for such injuries.

Chen would have been competing at his first senior world championships. He had said his goal for the season was a junior world title, and he would have been the favorite after winning the Junior Grand Prix Final.

Grant Hochstein, who finished fourth Sunday and was designated the first alternate, will take Chen's place at senior worlds, which start March 30 in Boston. Jason Brown, the 2015 U.S. champion who finished fourth at worlds last year, petitioned for a spot on the world team after he missed nationals because of a back strain, but U.S. Figure Skating selected the top three finishers Sunday.