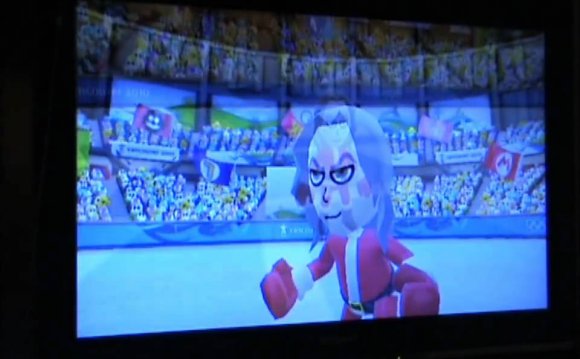 Princess Daisy is the spunky princess of Sarasaland and first appeared in Super Mario Land as the damsel in distress. She's good friends with Peach and is the love interest of Luigi. Her first appearance in the Sonic the Hedgehog series was . In this game she was rivals with Blaze the Cat. She later appeared in in a new winter outfit with the other females in the game. She made a cameo appearance in as a trophy and as two stickers. Her trophy depicts her in her Mario Strikers Charged outfit to show off her tomboyish nature.

Mario & Sonic at the Olympic Games

Daisy racing Sonic, Peach and others in 110 meter hurdles.

In for the Wii and Nintendo DS, Daisy appeared as a Speed character. Being well balanced for many event types, Daisy was a good choice for a variety of play. In her fencing special, Daisy's flower power propelled her forward, allowing her to jab rapidly. In her table tennis special, Daisy spun around with flower petals surrounding her paddle, and knocked the ball back covered in petals with increased speed.

Like Peach, Daisy is a princess, although she comes from Sarasaland. Daisy is exceptionally fast and will perform well in all the Speed-based events, but her solid technique also will help her excel in some aquatics and gymnastics competitions.

Mario and Sonic at the Olympic Winter Games

Daisy and the other females in their new Winter sports attire.

Daisy returns in, , also for the Wii and Nintendo DS. She returns as a Speed type and has the Flower Trampoline technique on both versions as well as a Flower Dash technique on the Nintendo DS version. Daisy and other female characters sport a new outfit specifically for the winter games.

In the Wii version, there are a number of items available for purchase relating to Daisy. Players can buy two decals of Daisy, one winter and one of her regular appearance. Also available is a set of Daisy banners; all of these items can be used to personally decorate event equipment. Like other characters, a Daisy Suit is available for purchase for a Mii to wear; it increases both speed and acceleration. In the Nintendo DS version, the Adventure Tours mode features Daisy as a key character in thwarting Bowser and Dr. Eggman's evil plans. Daisy helps out on a number of occasions through the plot. She is first found in Blitzland, where the player must use Blaze to defeat her in Ultimate Figure Skating. Afterwords she is used to complete a mini-game in Ice Peak to protect an affectionate Chao's Freezalea patch from a wild Kiki.

Daisy is later used to complete two missions run by Lakitu; Short Track and Intense Short Track. Lakitu requests Daisy personally to boost crowd appeal, and he offers the Meteor Curling Stone as a reward; the Meteor Curling Stone is used to complete the games final missions, including the boss battle with Bowser and Dr. Eggman. Once the final battle is won by Mario and Sonic, every character chimes in on their hand in victory and Daisy announces, "There's no way we'd ever lose to a bunch of misfits like Bowser and Eggman".

Daisy is the Princess of Sarasaland. While a bit of a tomboy, Daisy and Peach are great friends because they can relate to one another as they share the same regal status. She is also good friends with Mario and Luigi. Watch out for her Flower Power- she uses her flower trampoline technique on the Wii and DS, and Flower Dash technique on the DS to give her an edge when competing!

Mario and Sonic at the London 2012 Olympic Games

Princess Daisy appears as a speed type character again in Mario and Sonic at the London 2012 Olympic Games. In the trailer for the game, she is seen performing in the aquatics along with Peach, Blaze, and Amy. There is also an unlockable Daisy costume that can be worn by a Mii .

"Like Peach, Daisy is a princess and she comes from Sarasaland. Daisy is exceptionally fast and will perform well in all speed-based events, but her solid technique also will help her excel in some aquatics and gymnastics competitions."

Daisy's colors return in Brawl as one of Peach's palettes.

Daisy did not make a playable appearance in the game, however, Princess Peach has a recolor that mimics the pallet design of Daisy's model. When selecting the random button for the player's name and the stage's name, Daisy's name pops up by chance as "DAISY".

Daisy also appeared as 2 stickers, and her own trophy. Daisy's trophy is modeled after her Mario Strikers Charged appearance, as it is said to "compliment her spunky scoring strikes".